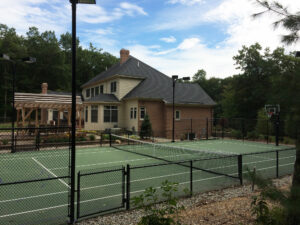 Challenge: Client wanted a large sport court installed in a location that included an elevation change of 5’, existing steps to a walkout basement, and very tight property line setbacks. Also, the home builder buried logs and stumps on a section of the area not realized until Spatial began excavation for this new sport court.

Solution: After analyzing the restrictions and limitations of the space, then determining the best access and flow for the client, the project moved forward. All setbacks were honored as per the approved plans, and the access in and out of the court flows beautifully.

With regard to logs and stumps, these were identified just below the required excavation depth. I noticed something felt soft and questionable, and after digging a little deeper, uncovered the debris. After an additional two days of excavation, the area was filled with stable materials and the project continued. Most other contractors hired to do this project would not have spent the extra time and effort, remove the logs and stumps, and avoid the long term compromise. Most contractors would accept that the problem would not present itself for years down the road, and they would be long gone.